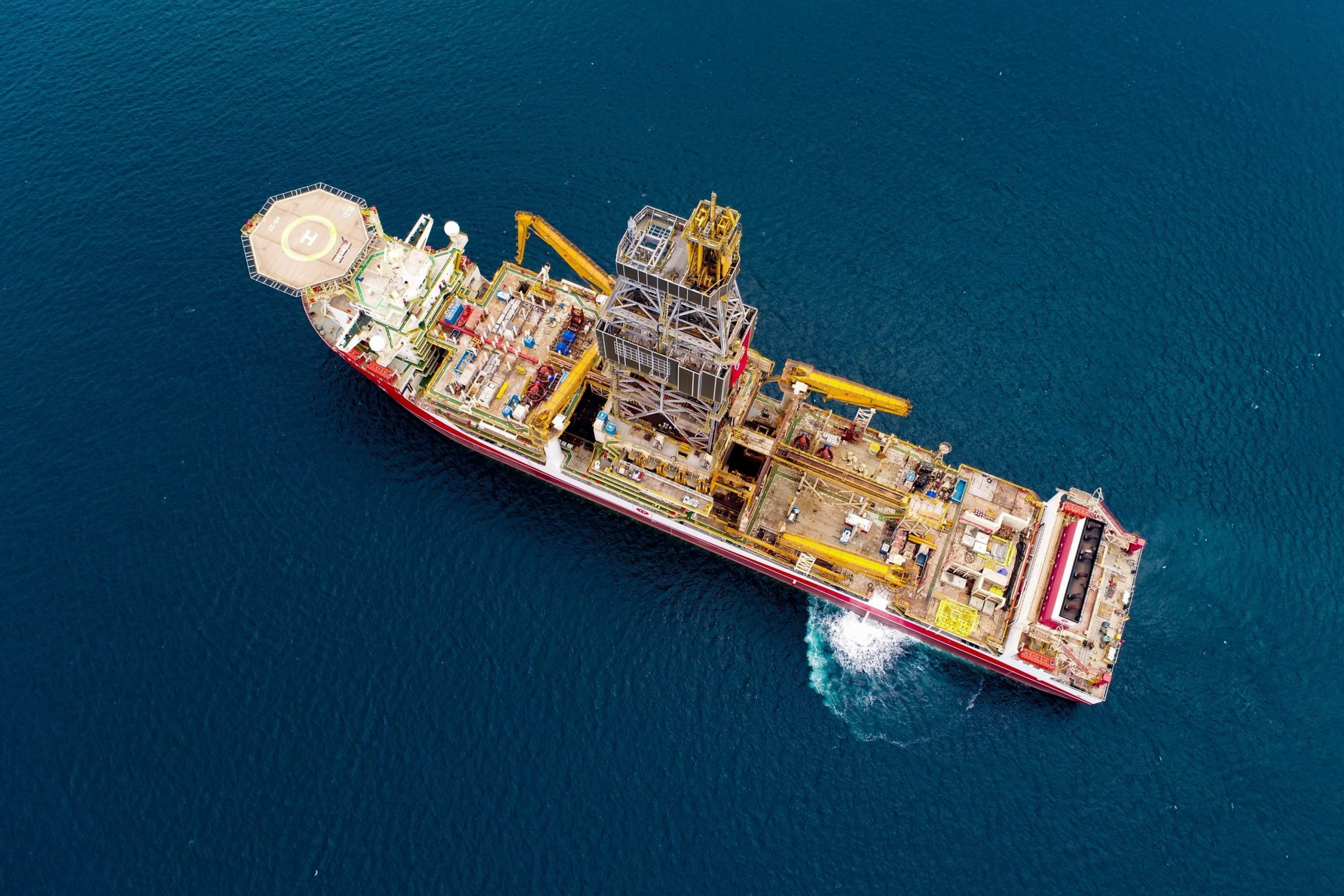 Kanuni drillship is seen off Haydarpaşa port on the Istanbul's Asian side, Turkey, Oct. 20, 2020. (IHA Photo)

Turkey is exploring and analyzing options for leasing or acquiring a new drilling vessel, according to the nation’s energy and natural resources minister, as activities intensify in the Mediterranean and the Black seas.

After the country’s biggest natural gas discovery made recently in the Black Sea, Dönmez signaled that good news may also come from a borehole in the Eastern Mediterranean after additional seismic and drilling works.

“Our plans were that two to three drillships would be enough until the first discovery. But we will have intensive drilling work after the first find,” Fatih Dönmez told reporters on the sidelines of his visit to the central Aksaray province this week.

“One of our vessels is in the Mediterranean. We have two ships in the Black Sea. We have said we may go in the direction of buying or leasing a third ship. Our friends are working (on the subject). We will prefer what is more economic for us,” Dönmez said.

Turkey currently has three drillships in its fleet operating in the Eastern Mediterranean and the Black Sea.

Yavuz operates in the Eastern Mediterranean, while Fatih has been carrying out activities in the Black Sea.

The third drillship, Kanuni, which joined the fleet earlier this year, is currently located off Istanbul and will soon depart for the coastal town of Filyos before joining Fatih in January of next year, according to the minister.

It will set sail to a fresh location in the Black Sea to start new explorations in early November, Dönmez said. It will kick-start its new activities in the Türkali-1 borehole in the Sakarya gas field.

“We plan to open between 30 and 40 wells there. That means we are talking about a seven- to eight-year business plan. But we will make the first production in 2023. If we complete eight to 10 wells by 2023, it means we will start production,” the minister said.

While maintaining production on the one hand, Turkey looks to continue developing the field with new production wells. “Our plan is to finish all the work there by 2028. These all are about the current field,” Dönmez said.

Turkey expects the first gas flow from the field in 2023, with an envisaged annual gas flow of between 5-10 bcm. The field is expected to reach plateau production of around 15 bcm as of 2025.

Dönmez earlier said Turkey will operate the gas field on its own, but it may cooperate with foreign firms in terms of detailed work and equipment.

The country will kick-start seismic works in November and has a five-to-six-month seismic program for the Sakarya gas field, the minister noted. He said exploratory drilling would be made in the event of promising seismic data.

“These are the neighboring fields of the field where we made this first existing discovery. Project geologists say these sites are similar and that they are hopeful,” Dönmez said, adding that further details will be known after the completion of seismic studies and drillings.

On the country’s activities in the Eastern Mediterranean, Dönmez said they carried out eight drillings in the region.

“We have read gas flows from a few wells, but (they) were not continuous. It is not like the Sakarya gas field in the Black Sea,” he added.

Yavuz drillship has been carrying out activities in the Selçuklu-1 zone to the west of the island of Cyprus, where the minister said the program had continued longer than expected because of gas flows that kept coming sporadically.

“We are conducting an additional seismic study closer to there. From that point of view, we see potential there. But we need to test it with that seismic study and a second well that we are going to do in the aftermath,” Dönmez noted, stressing that goods news is likely from the area.

The minister also emphasized that the country received requests from the Mediterranean, European and Black Sea countries for Turkish vessels to carry out work there as well.

“But now, with this latest discovery, we need to focus on our own fields. We are delaying those offers,” Dönmez said.

The country has two seismic vessels in its fleet, Oruç Reis and Barbaros Hayrettin Paşa. Both of the vessels have been on duty in the Mediterranean.

According to Dönmez, Oruç Reis has completed half of the business plan at the field south of the Mediterranean town of Kaş.

“We have completed our seismic work in the east-west direction. Now, we are moving on to seismic studies in the south-north direction … Here we have a program of about two months to complete the two-dimensional study. Then we will evaluate the data and make a plan for three-dimensional seismic activities,” the minister explained.

The Black Sea gas find is expected to relieve Turkey’s dependence on Russia, Iran and Azerbaijan for energy imports.

Ankara expects gas suppliers to offer more competitive pricing and flexibility if they want to renew long-term contracts. More than a quarter of Turkey’s long-term gas contracts expire next year, including imports via pipeline from Russia’s Gazprom and Azerbaijan’s SOCAR and a liquefied natural gas (LNG) deal with Nigeria.

Turkey’s Petroleum Pipeline Company (BOTAŞ) and the private sector currently have a 54 bcm contract, of which 16 bcm will end in one to two years, said Dönmez.

“In the meantime, their negotiations are being held. But when we look at the next five to six years, this figure looks like it will reach 30 bcm, those (contracts) that will end. Of course, we are not going to end all of these. We will look at the amount of production we will get from the Black Sea. We will fill the deficit from external sources,” Dönmez noted.

Turkey imported around 45.3 bcm of natural gas in 2019, at a cost of approximately $12 billion (TL 99 billion). The total bill for gas imports relies heavily on oil prices, while Turkey’s long-term oil-indexed gas contracts with Russia, Iran and Azerbaijani have directly contributed to the country’s foreign trade deficit.

“Taking into account both our domestic source and the conditions from other external sources, we will move forward by evaluating the proposals that are most suitable for us,” Dönmez said.

Turkey’s gas imports up 6.5% in August as Russia top supplier