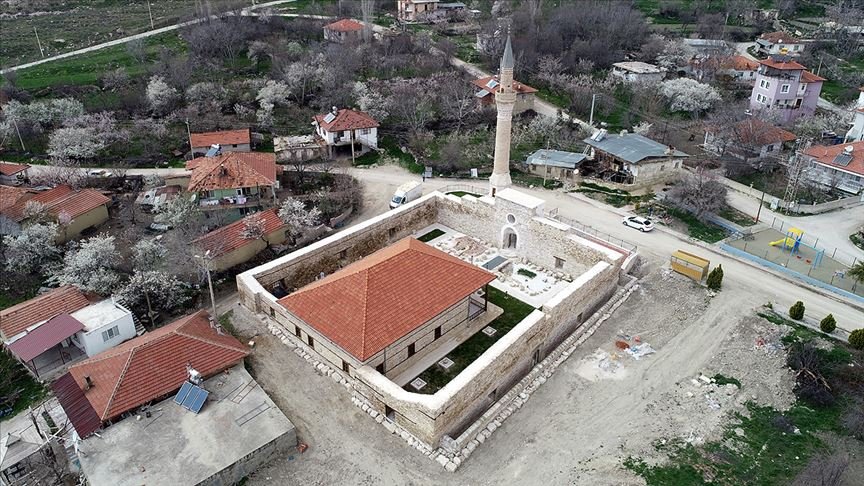 The Alaaddin Mosque, considered to have been built by Alaattin Ali of Karaman, a bey of Karamanids, during the Anatolian Beyliks era in the district of Korkuteli in Antalya, continues to contain the traces of 700 years of history thanks to restoration works carried out to preserve its original form.

The traces of history have been preserved in the Alaaddin Mosque, which is estimated to have been built in the 14th century, with works that have lasted for about 15 years.

As part of the excavation works, underground structures were unearthed and the mosque and the crown gate – which were destroyed over the years – were repaired under the project of the Antalya Regional Directorate of Foundations, approved by the Antalya Regional Board for the Preservation of Cultural and Natural Heritage.

The mosque, whose minaret is said to have been built by Murad Pasha, the grand vizier of Ottoman Sultan Ahmed I, attracts attention with its crown gate, mihrab, decorations and embossments. It was opened for worship last March.

In an interview with Anadolu Agency (AA), Hüseyin Coşar, the head of the Regional Directorate of Foundations in Antalya, said that the ceiling of the mosque fell due to a fire nearly a century ago with the entire mosque eventually being destroyed over the years. He said after the destruction of the mosque, people in the region had to perform their worship in a small masjid in the same area.

Referring to the fact that the interior of the mosque was filled with soil 1 meter (3.2 feet) high when they started the restoration, Coşar said that they had excavated the soil and unearthed the original floors of the mosque.

Indicating that the stones of the crown gate were numbered, removed and properly bonded as result of a decision made by the Preservation Board, Coşar added: “An analysis was carried out to preserve qualified stones, and the restoration was completed using the same kind of stone. A lot of spolia stones and rubbles came out of it. Unqualified stones were removed, and qualified stones were taken under special preservation. At the moment, we do not have any loss in patterns or quality stones.”

Coşar noted that spolia stones found in the structure are being showcased in the mosque’s courtyard.

Coşar said that the work was done in line with the opinions of experts and in a completely scientific way and that from time to time they faced criticism for the fact that the stones of the restored crown gate were white.

Antalya sees hottest day of 2021 as people flock to sea

Coşar further stated that the stones had to appear white due to the principles of restoration and that they did not wear the original stones used. “Days of work were carried out on any stone. The crown gate, which is identified with the mosque, bears traces of several traditions. It is not the continuation of a model, but a new experiment of art. There are many beautiful decorations that have never been seen before. We have preserved them all in their current form. If he had waited a little longer, it would have completely collapsed,” he said.

The Karamanids ruled parts of the southern Turkish provinces of Karaman, Konya, Isparta, Antalya and Mersin between the 13th and 16th centuries. This time was known as the Anatolian Beyliks era, which began when the Mongols defeated Anatolian Seljuks (Sultanate of Rum) and invaded Anatolia in 1243, leading to the emergence of small principalities led by a Turkic bey. Karamanids were the leading beylik until Ottomans emerged as an important power in the northwest and extended their territories against the Byzantine Empire, and the struggle against the two went on for two centuries. The beylik is also known for its policy of using Turkish as the official language at a time when Persian and Arabic prevailed in government, education and religion.

The Ottomans conquered, inherited or joined forces with most of the beyliks until they were defeated by Tamerlane in 1402. Beyliks were partially restored upon the defeat but were quickly recaptured by the Ottomans, with Karamanids totally subdued during Sultan Mehmet II’s (the Conqueror) rule in the early 1480s after a long struggle. The last remaining beyliks, serving as a buffer between the Ottomans and Mamelukes of Egypt, were conquered by Sultan Selim I during his Egypt campaign.

Serbia Thanks Turkey After Receiving Another Batch Of Medical Supplies

Storytime: The unlucky tale of black cats, from rags to riches in reverse