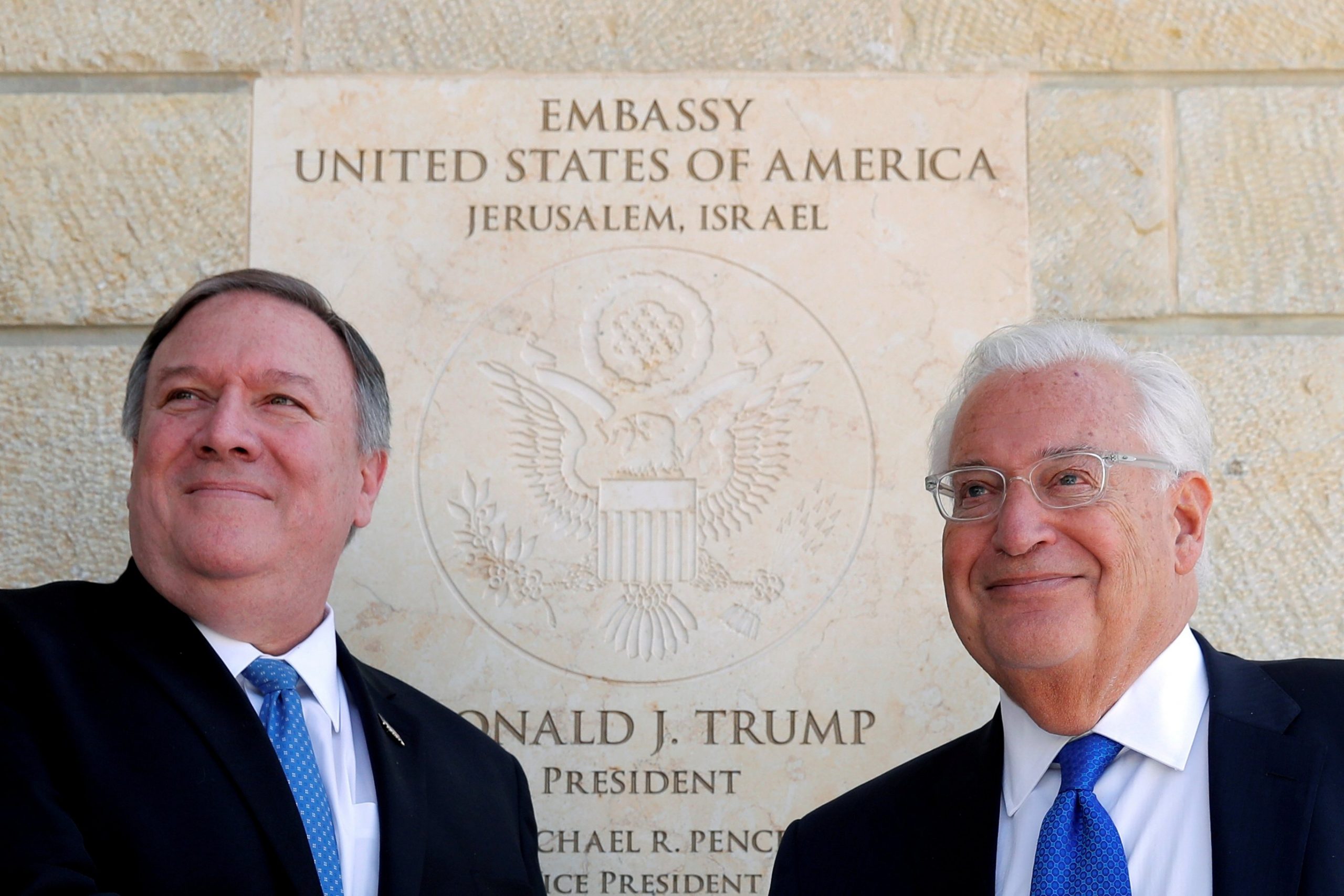 U.S. Secretary of State Mike Pompeo (L) and U.S. Ambassador to Israel David Friedman stand next to the dedication plaque at the U.S. Embassy in Jerusalem, March 21, 2019. (Reuters Photo)

The United States said Thursday that its citizens born in Jerusalem will be able to list Israel as their place of birth, after President Donald Trump recognized the contested holy city as the Jewish state’s capital.

Until now, Americans born in the city had simply “Jerusalem” listed on their passports without specifying the country.

Effective immediately, Jerusalem-born Americans can choose to state Israel on their passports that will otherwise stay the same – an option sure to be preferred by the city’s predominantly Palestinian populated eastern region.

The announcement comes days before the presidential election in which Trump has promoted his steadfast support of Israel, a key cause for his evangelical Christian base. In his first year in office, Trump recognized Jerusalem as Israel’s capital and later moved the U.S. embassy there – putting the United States at odds with virtually every other country.

“The United States recognizes Jerusalem as the capital of Israel and its seat of government but continues to take no position on the boundaries of Israeli sovereignty in Jerusalem,” Secretary of State Mike Pompeo said as he announced the passport changes.

“This matter remains subject to final status negotiations between the two parties.”

Palestinian groups have condemned the deal, saying it ignores the rights of Palestinians and does not serve the Palestinian cause. The agreements broke with decades of Arab consensus that there would be no normalization of relations with Israel until it had made peace with the Palestinians.

Palestinian President Mahmoud Abbas warned that the deals would “not achieve peace in the region” until the U.S. and Israel acknowledged his people’s right to a state. “Peace, security and stability will not be achieved in the region until the Israeli occupation ends,” he said. Abbas warned that “attempts to bypass the Palestinian people and its leadership, represented by the PLO, will have dangerous consequences.”

The Israeli-Palestinian conflict has been ongoing for decades with little hope for a solution in the near future. The war that broke out in 1948 when Israel declared statehood and neighboring Arab states invaded is remembered every year on May 15 by Palestinians as Nakba Day (Nakba meaning catastrophe in Arabic). Hundreds of thousands of Palestinians fled or were expelled from their villages during the war.

US cuts troop levels in Afghanistan, Iraq but stops short of full pullout