The stalemate in the Gulf can likely only be resolved by the US. 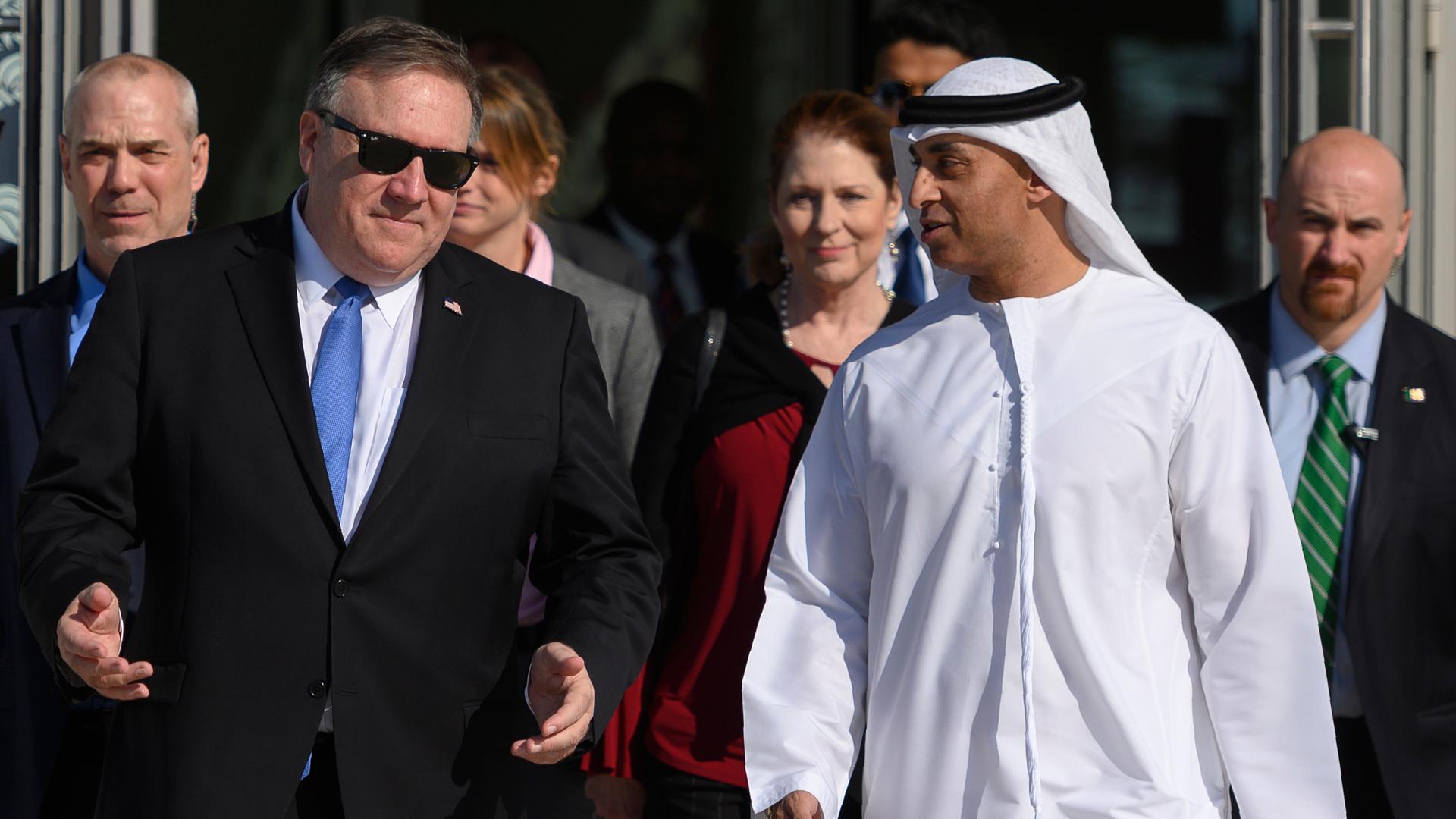 On 14 September, US Secretary of State Mike Pompeo made a flamboyant statement in front of the audience of the third US-Qatar Strategic Dialogue.

Besides praising Qatar’s role as a regional mediator, he said, “it’s past time to find a solution to the Gulf rift.” He then added, “The Trump administration is eager to see this dispute resolved.”

Pompeo’s call for Gulf unity does not exist in a vacuum. The US Secretary of State advocated for a solution throughout his visit to the region in late August as part of a renewed effort by Washington to resolve the Gulf rift.

Just one week before Pompeo’s visit, the US top diplomat for Near East Affairs, David Schenker, affirmed that the Kuwait-brokered mediation could bring about a solution in the weeks ahead because the parties were showing “flexibility.” Yet, no tangible breakthrough has occurred so far.

Fuelled by years of misalignment, the Gulf crisis began when Saudi Arabia, Bahrain, Egypt and the UAE imposed a land, air, and sea blockade on Qatar in May 2017. The announcement was followed by 13 requests to the gas-rich Gulf monarchy which included shutting down the broadcast channel Al Jazeera, closing a Turkish military base, and cutting ties with the Muslim Brotherhood.

But instead of acquiescing, Qatar cautiously diversified its alliances, and so did its rivals. By seeking alliances with hostile powerhouses, like Iran, Turkey, and now Israel, the Gulf cleavage has become embedded into the broader Middle Eastern crisis and has deepened regional fault lines.

The view from Washington

The push on the Gulf crisis comes on the wave of the recently-signed ‘Abraham Accords’, which normalised relations between Israel, Bahrain, and the UAE. If successful, this dual-track endeavour would allow the Trump administration to kill two birds with one stone: consolidating the anti-Iranian front and boosting a foreign policy success ahead of an election.

Pompeo believes the accord has built enough political momentum for the normalisation of relations between Qatar and its neighbours. However, the crisis has rooted deep into Gulf politics and beyond.

At the beginning of the crisis, Saudi Arabia and the UAE misinterpreted President Trump’s strong initial backing as a blank check to pursue any foreign policy objective. Despite the rhetoric, the US showed little interest in pressing its Arab Gulf partners to reach an agreement.

This attitude was the result not only of America’s gradual disengagement from the Middle East but also of the prioritisation of other dossiers, like the oil markets, Yemen, Israel and Iran. Now the policy has changed but a solution seems still out of reach.

So why is Washington, the main ally to all stakeholders, failing to end this standoff?

From unruly allies to strategic rivals

When the blockade was enforced, Turkey and Iran stepped in to rescue Qatar. At the outset of the crisis, Turkey swiftly deployed military personnel to Doha and Tehran offered its air and maritime space to ship goods into the blockaded Arab monarchy.

Doha and Tehran enhanced cooperation in the energy sector as well to manage offshore gas fields. Yet, Qatar skilfully avoided too much cooperation with Tehran fearing retaliation from the US, which settled its largest military base in the Middle East right in Qatar. Turkey also significantly deepened its relations with Doha.

Like Tehran, Ankara launched an operation to ship food and other supplies to Qatar in June 2017. Doha then welcomed the enlargement of the Turkish military base on its soil. Since then, bilateral cooperation enhanced in nearly every sector.

Today, Doha is one of the largest foreign investors in Turkey and has recently increased swap reserves in Ankara’s central bank to $15 billion in order to cushion the financial turmoil caused by Covid-19.

On the other side, Saudi Arabia, Bahrain, and the UAE have been moving closer to Israel. One major factor in play pertains to these four countries’ shared fears of Iran’s expansion across the Middle East.

The Abraham Accords simply brought to surface long-standing cooperation in the realms of defence, intelligence, and cybersecurity between Israel and Gulf powerhouses.

While the UAE is eager to access Tel Aviv’s military technology and send positive signals to Washington, Israel looks forward to attracting much-needed Emirati investments into its tourism and high-tech sectors at a time of crisis.

In the geopolitical arena, though, the Abraham Accord is directed as much against Iran as it is Turkey. The forward defence policy of President Erdogan has transformed Turkey into a decisive player in key theatres like Syria and Libya, making it a de-facto competitor in the race for regional leadership along with Iran and the Saudi Arabia-UAE axis.

This, in return, has alarmed the other Middle Eastern powerhouses, especially in the Gulf. And now, Qatar is inextricably bound to the Turkish sphere.

Besides economic and defence ties, Qatar and Turkey centred their foreign policy strategies around supporting popular movements in the region, usually affiliated to the Muslim Brotherhood.

Their role as patrons of the moderate conservatives won them the hostility of those countries which perceive ‘Islamists’ as an existential threat, e.g. the UAE. Such divergent tactics set the Turkey-Qatar and the Israel-Saudi led bloc axes on a collision course.

Any rapprochement would entail a radical (and therefore unlikely) shift in regional alliances for one of the two blocs.

With the deepening of regional cleavages, the strategic rivalry between the two blocs has translated into an increasingly violent geopolitical competition.

This has become visible across multiple contexts of the greater MENA region, from Libya to Yemen via the Horn of Africa, where the two blocs intervened in support of different local actors or proxies.

Libya is probably the most evident case. There the confrontation almost escalated into direct conflict when Ankara decided to intervene alongside the UN-recognised government in Tripoli against the UAE-backed General Haftar.

In Sudan, Riyadh and Abu Dhabi swiftly put their financial might behind the generals who toppled President Bashir, close to Qatar and Turkey, in April 2019.

The result is that the UAE will likely replace its foes in the management of Sudanese ports in Suakin and Port Sudan. Somalia presents a similar scenario.

In Somalia, Qatar and Turkey have consolidated their alliance with the federal government of President Farmajo, while the UAE has arranged deals with the breakaway republic of Somaliland and other Somali states which oppose Mogadishu’s rule, like Puntland and Jubaland.

Yemen is the most emblematic case of this new strategic paradigm. There the Saudi-led coalition used the Qatar-backed Al Islah party and the UAE-supported Southern Transitional Council together against the Houthi rebels, seen as a vector of Iranian influence in the Arabian Peninsula.

But the more Riyadh’s engagement has phased out, the more the coalition has cracked. As a result, the Southern Transitional Council has pursued its separatist ambitions in southern Yemen, whereas Al Islah has turned to Turkey for support against the STC and the Houthis.

Over the past three years, the Gulf rift has cut across the political, economic, and even social spheres. Regional geopolitics has further entrenched this standoff between Qatar and the members of the Saudi-led bloc. On top of that, the UAE stand on a firm hard-line position against Qatar hindering any mediated solutions.

Washington is the only external power that can pull the strings in the right direction. But seeing how the dispute developed up until now, the US should put all its weight behind such an endeavour, but unfortunately, that doesn’t seem to be the case right now. A new president, or one who doesn’t need to worry about re-election, may refocus their efforts on resolving the stalemate.