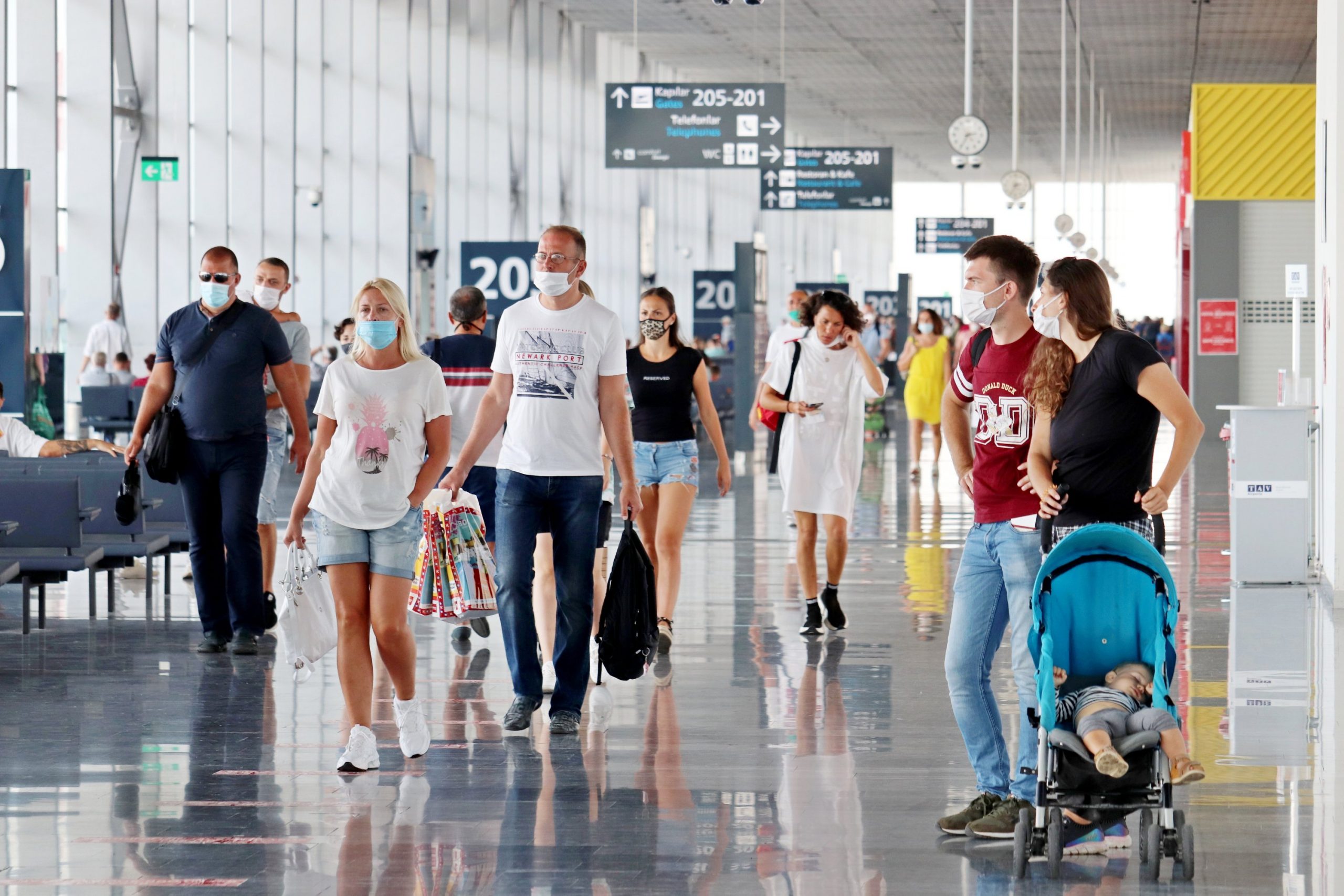 Tourists in masks walk in a terminal at Bodrum-Milas Airport during the coronavirus pandemic, southern Muğla province, Turkey. (Shutterstock photo by Oleg Elkov)

From July to September, quarterly tourism revenue fell 71.2% from $14 billion in the same period last year, due to coronavirus-related travel restrictions and pandemic concerns.

According to official figures, individual expenditures constituted nearly $3.1 billion of the total tourism income, while some $946.7 million of the revenues came from package tour expenditures.

In the three-month period, Turkey welcomed over 5.6 million visitors – 79% foreign and 21% Turkish citizens living abroad – a 74.1% drop on a yearly basis.

TurkStat said visitors’ average expenditures were $722 per capita, as foreigners spent $649 per capita and Turkish citizens spent $969 per capita.

The primary purpose of visits by foreigners was travel, entertainment sports and cultural activities with 74.9%.

The primary travel reason for Turkish visitors living abroad was visiting relatives and friends with 65.4%.

The institute also said that Turkey’s tourism expenditure – which is the expenditure of the Turkish citizens residing in Turkey and visiting abroad – posted a 90% annual decline to $126 billion in the July-September period.

“In this quarter, the number of Turkish citizens visiting abroad decreased by 93.1% compared to the same period last year,” TurkStat said.

Some 203,223 Turkish citizens traveled abroad and spent $620 per capita on average.

Meanwhile, the country welcomed some 9.46 million foreign visitors during the first nine months of 2020, the country’s Culture and Tourism Ministry announced Friday.

The number of foreigners visiting the country dropped some 74% on a yearly basis due to the outbreak, the ministry data showed.

While the country hosted 4 million foreign visitors in August and September, this figure was around only 50,000 during April and May, when the pandemic peaked in Turkey.

In the nine-month period, Istanbul remained Turkey’s top tourist destination, attracting 38.28% of all visitors –around 3.6 million.

The Mediterranean resort city of Antalya followed it with 25.56%, or over 2.4 million, foreign visitors in the same period, and the northwestern province Edirne, which borders both Bulgaria and Greece, saw the third-highest share with 13.16%.

In September, the country saw 2.2 million foreign visitors, down 59.40% year-on-year.

The hotel occupancy rate across Turkey was 35.4% in the nine-month period, down 47.8% from the same period last year, a hotel association said Friday.

The average daily rate (ADR) for rooms dropped 9% in the same period to 72 euros ($84), while revenue per available room (RevPAR) was down by 52.5% to 25.4 euros, according to the Turkish Hoteliers Association (TÜROB).

Several hotels in Turkey temporarily shuttered due to the pandemic and the occupancy rate of 44.9% was calculated from the hotels that decided to stay open, the group said.

The highest occupancy rate was seen in Antalya both in September and the nine-month period, with 60.5% and 39.8%, respectively.