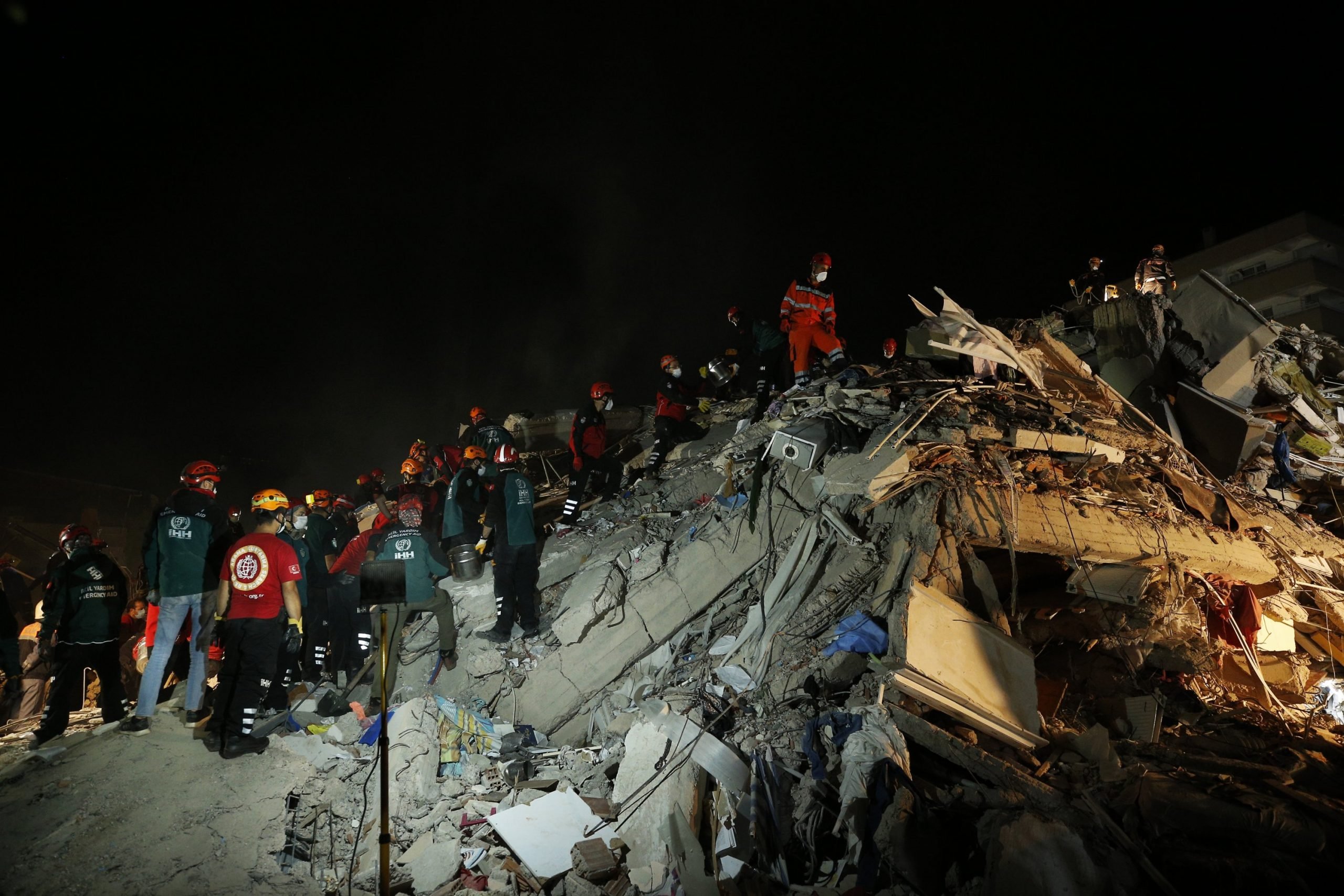 Members of rescue services search in the debris of a collapsed building for survivors in Izmir, Turkey, early Saturday, Oct. 31, 2020. (AP Photo)

A 6.6-magnitude earthquake struck off the coast of Seferihisar district in the western province of Izmir on Friday according to the Disaster and Emergency Management Authority (AFAD). The tremors occurred in the Aegean Sea at a depth of 16.5 kilometers (10.3 miles) but were felt across Turkey’s third-largest city and as far away as Istanbul in the north.

Turkey’s Health Minister Fahrettin Koca on Saturday said 37 people were killed and more than 880 others were injured. Crews were working to rescue survivors from the rubble of several buildings.

Speaking on Saturday, Environment and Urbanization Minister Murat Kurum said some 5,000 search and rescue personnel were working on the ground.

President Recep Tayyip Erdoğan said late Saturday that after the debris is removed, new construction work will begin and new houses will be built quickly for those whose homes were destroyed.

Kurum said 17 buildings collapsed in Izmir and rescue efforts were underway at eight of them. So far some 100 people were rescued.

Izmir Governor Yavuz Selim Köşger told reporters that four buildings were completely destroyed in the earthquake, and 70 were rescued from the rubble. He said one of the fatalities had drowned.

Secrets Of Yesilova: A Society That Worshipped The Mother Goddess

The Eastern Mediterranean dispute: is there light at the end of the tunnel?

Professor Haluk Özener, head of the Boğaziçi University Kandilli Observatory Earthquake Research Institute, said at a press conference in Istanbul on Friday that there have been 19 aftershocks between the magnitudes of 3.3 and 4.8 since the earthquake, which lasted for more than 15 seconds. He also said a 30 to 40-kilometer fault line ruptured during the tremor.

The quake was strong enough to send people into the streets in panic in a country that has seen major earthquakes that killed thousands in the past. Three people were pulled out alive but injured from the rubble of a building in Izmir’s Bayraklı district.

Shortly after the earthquake, President Recep Tayyip Erdoğan said all government institutes were mobilized to help the city.

“We stand with all our citizens affected by the earthquake with all means possible. All our respective institutes and ministers have been mobilized,” he said.

Television footage and videos circulating on social media showed people desperately removing the debris of some collapsed buildings to reach the people trapped under the rubble.

People in Izmir and neighboring provinces were warned by the AFAD to stay away from their homes if there was visible damage to the buildings.

Kandilli Observatory’s Earthquake Research Institute also urged people to stay away from damaged buildings, warning that a secondary earthquake could cause more to collapse.

“There could be secondary earthquakes of up to 5.8 magnitudes and a strong tremor could knock down already damaged buildings,” Doğan Kalafat of the institute told broadcaster CNN Türk.

People stand outside their homes after the earthquake, in Izmir, western Turkey, Oct. 30, 2020. (AP Photo)

Footage from the region also showed a small-scale tsunami, particularly powerful in the coastal town of Sığacık in Seferihisar.

The quake was also felt across the eastern Greek islands and even in the Greek capital Athens. A boy and a girl were confirmed dead after being found unconscious in an area where a wall had collapsed near Vathy, a town on the island of Samos.

Greek media said the residents of Samos and other islands fled their homes, while some rockfalls were reported. It was also felt in Bulgaria. Greek seismologist Efthymios Lekkas told Greek state television ERT that it was still too early to say whether this was the main earthquake, although he said it was likely it was. “It is an event that is evolving,” Lekkas said, adding that some damage had been reported in parts of Samos. A tsunami warning was issued, with residents of the Samos area told to stay away from the coastline. Seawater rose above the dock in the main harbor of Samos and flooded the street. The regional governor of the Samos region, Yiannis Stamoulis, said no injuries had been reported on the island. Residents have also been told to stay away from buildings, as aftershocks continued to rattle the area.

The last major earthquake to hit Izmir was in October 2005, with an epicenter near Seferihisar. Three earthquakes between the magnitudes of 5.7 and 5.9 over four days rocked the city and nearby Aydın then, without major damage, while two people died of a heart attack.

A woman is carried on a stretcher after she was rescued from the rubble, in Izmir, western Turkey, Oct. 30, 2020. (AA Photo)

Experts say the Aegean region often generates earthquakes but usually at sea. The seabed and land are densely dotted with fault lines. They expect more aftershocks and smaller earthquakes as the cracks in fault lines are anticipated to linger, though their magnitude will diminish over time.

Turkey is among the world’s most seismically active zones as it is situated on several active fault lines, with the most potentially devastating being the Northern Anatolia Fault (NAF), the meeting point of the Anatolian and Eurasian tectonic plates. It has suffered devastating earthquakes in the past, including the 7.4-magnitude earthquake in Gölcük in 1999. It killed more than 17,000 people in the greater region. The last major earthquake was in January, with a magnitude of 6.7. It killed 41 people in the eastern provinces of Elazığ and Malatya and injured 1,607 others.