A mosque, a church and a synagogue 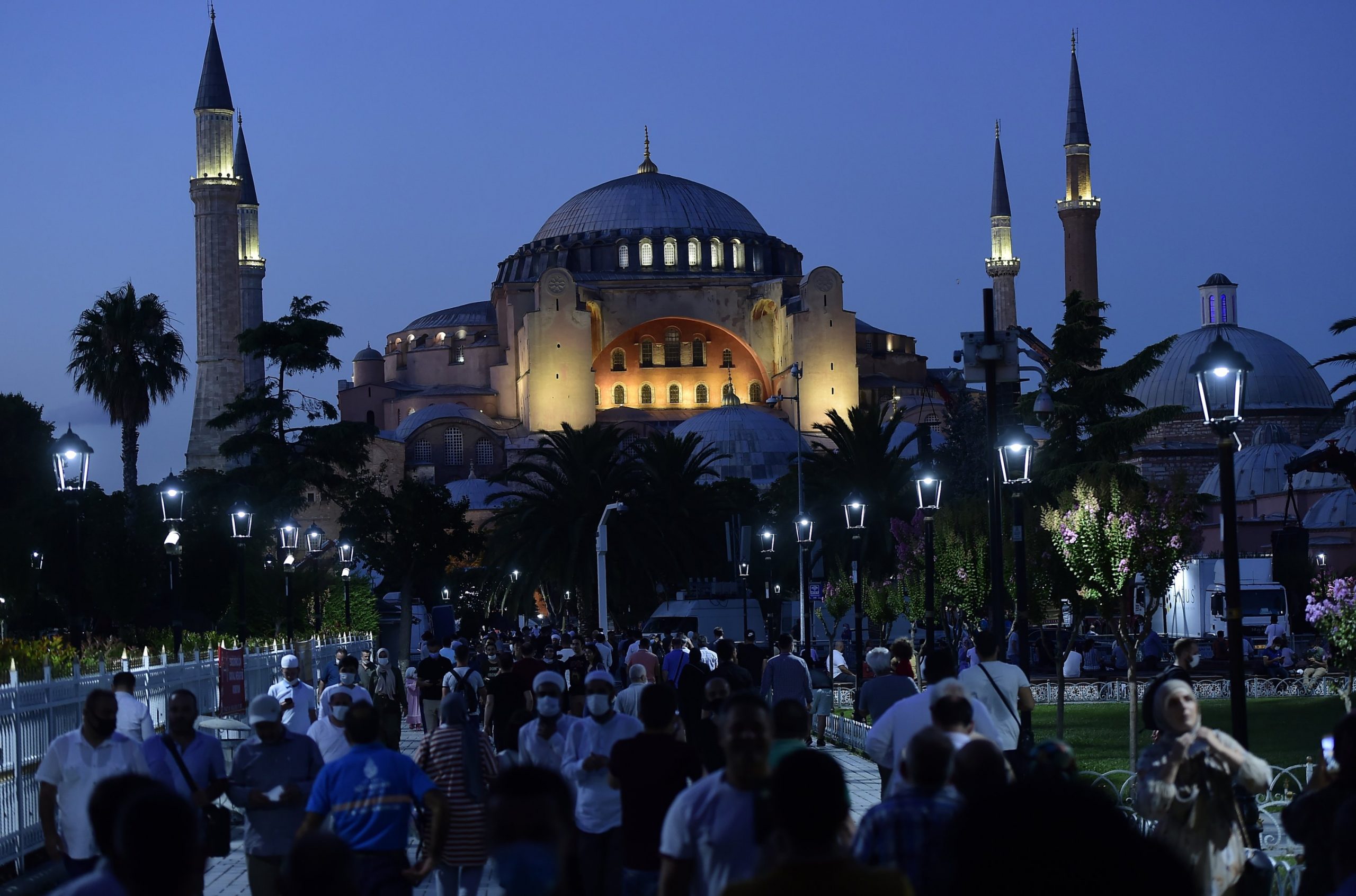 Almost two weeks ago Turkey’s Council of State made a landmark decision, rectifying history by reverting Hagia Sophia to a mosque. Now with great fervor, Turkey has embraced the Hagia Sophia Grand Mosque as a house of worship. In 1934, in line with the considerations of the young Turkish republic, the mosque had entered a stage of ambiguity as a museum. Now that ambiguity has been shed with great confidence, and the building has once again become a pillar of Turkey’s consciousness.

The conquest of Istanbul and Hagia Sophia signify the transition of the Ottoman polity to an empire and are representative of the vast cultural and political heritage that developed in the post-conquest period, culminating in the golden age of the Ottomans. Thus, the symbolism of this move cannot be underscored by any measure as it is a reclaiming of the mantle of the vast Turkish Ottoman civilizational experience.

What followed the decision was an outcry from a chorus of voices from an all-too-familiar gang, whose aim was to once again slander Turkey and present this decision as some form of attack on Turkey’s Orthodox minority. Headlines were awash in the Western press with phrases such as “Turkey is erasing its Christian past” or “Erdoğan converts ancient cathedral to mosque.” Nevermind the fact that the site has not been a church since 1453, the accusation that the Turkish government is out to erase Turkey’s non-Islamic heritage is completely false. The exact opposite is true.

Western spectators trying to teach Turkey a lesson on multiculturalism forget that Turkey has carefully been restoring Ottoman houses of worship belonging to all faiths. Turkey’s drive to ascribe authenticity and meaning to houses of worship does not begin and end with mosques only but rather encompasses the plethora of former sites of worship that constitute the Turkish landscape. Turkey is the successor state of the multi-confessional Ottoman Empire and works to live up to that legacy. The spirit of multiethnic, multi-confessional existence that came to define Ottoman imperial rule has been given a new lease on life under Turkey’s sincere attempts to restore churches, synagogues and mosques alike.

Most recently, in 2018, the spectacular Bulgarian St. Stephen Church, or “Iron Church,” was restored and subsequently unveiled by President Recep Tayyip Erdoğan and Bulgarian Prime Minister Boyko Borisov. The restoration project cost over $4 million, with the bulk of the financing under the auspices of Turkish authorities. Today the church is a testament to Istanbul and Turkey’s multicultural ethos, fully functioning and serving as a point of worship for adherents of the Bulgarian Orthodox faith.

The building, which had been left to its fate, had suffered severe corrosion due to the damp nature of the Bosporus shoreline and was restored to its original specifications. This move signifies how meticulously Turkey is working to preserve Ottoman heritage, whether that heritage is Islamic or Christian. Those slandering Turkey should strive for some sincerity. Would a government trying to erase Turkey’s Christian heritage strive so hard to preserve such monuments?

The truth of the matter is that Turkey is experiencing an unprecedented revival of its multicultural character, with great reverence being shown for former sites of cultural significance. It has now become a policy of the state to restore Ottoman sites to their former grandeur and ascribe them the authenticity that they require. In this regard, one cannot distinguish between the restoration of the status of Hagia Sophia to the restoration of the Iron Church, as both are the product of the same policy.

A second example of Turkey’s restoration endeavors culminated with the unveiling of the Grand Synagogue of Edirne in 2015. The synagogue, which opened in 1907, under an Ottoman decree to accommodate the needs of the burgeoning Jewish community in Edirne, had been left to decay after the 1940s. With immigration to Israel hastening, the Jewish community left Edirne in great numbers, and the synagogue closed its doors in 1983, with the grand monument becoming a mere shadow of its former self.

With restoration attempts picking up in the 2000s, the building was unveiled in a ceremony attended by government officials and representatives of Turkey’s surviving Jewish community. Today the synagogue is fully functional and reminds us of the Jewish presence that had once been a part of Edirne’s landscape.

The two examples above are a mere semblance of the projects being undertaken by Turkish authorities. The drive to restore former Ottoman heritage sites and provide them with the capacity to function extends from Turkish territory as well. Under the guiding hand of Turkish aid agencies, such as the Turkish Cooperation and Coordination Agency (TIKA), many sites in countries that constituted the former Ottoman Empire have been carefully restored.

The message of the president of religious affairs, Ali Erbaş, during the first Friday prayer service in the Hagia Sophia Grand Mosque since 1934 was clear. He maintained that the doors of Hagia Sophia are open to those of all faiths, as is the same with all mosques in Turkey. His tone was conciliatory and welcoming, concurrent with the policy of Turkey to restore and uphold all houses of worship inherited from our ancestors.

While Western commentators continue their mission to present this move as aggression against Christianity, they inadvertently uphold a “Clash of Civilizations” like discourse. The truth of the matter is that Turkey’s civilization is multi-pronged, and non-Muslims have their place as much as Muslims. As Hagia Sophia is restored to its former significance, so are the scores of other houses of worship that define the spirit of Turkey.

The West has lost its monopoly over the notion of multiculturalism. The catharsis that Western society is facing in the wake of the Black Lives Matter movement and the recent discussions on the persistence of institutional racism have laid bare this fact. While the media and so-called liberal press continue to slander Turkey on Hagia Sophia, their argument is rendered false. Never has Turkey’s drive to uphold multiculturalism been so strong. This surely is the product of a bold and confident Turkey, of which the restoration of Hagia Sophia is a testament to.

*MSc comparative politics candidate at the London School of Economics

Turkey Reopens The Sumela Monastery After Four Years Of Restoration

Celebrating Throne Day in the Kingdom of Morocco

Israel uses archaeology to appropriate the past

Hagia Sophia and the reorientation of society

The chaos spreading in major US cities