Covid-19 has infected more than 228M people and killed over 4.7M. Here are virus-related developments for September 19: 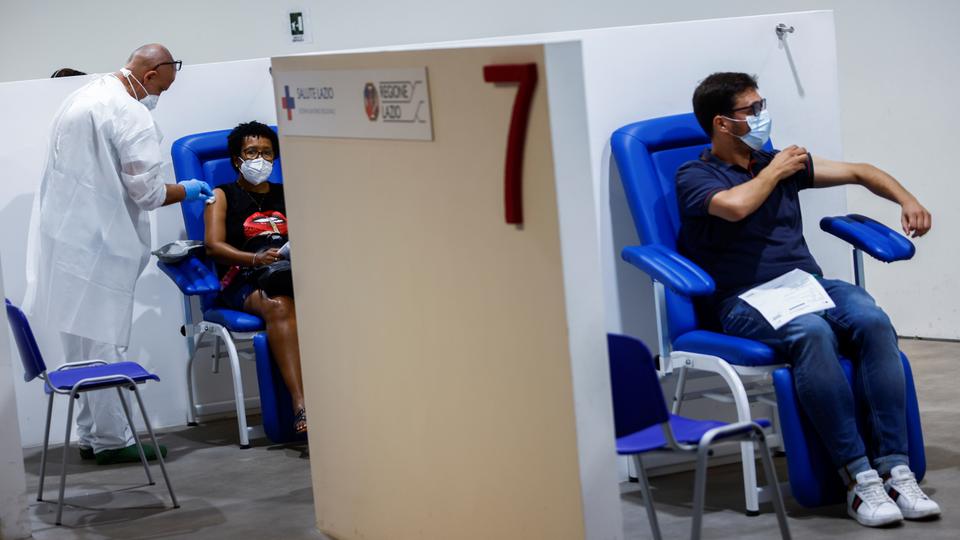 Bookings for coronavirus vaccines in Italy have spiked after the government said all employees must show proof of a jab, negative test or recent recovery from Covid-19, authorities said.

“On a national level, there was a generalised increase in bookings for the first dose of between 20 and 40 percent compared to last week,” coronavirus commissioner Francesco Figliuolo said in a statement.

Reservations for the first dose of the vaccine were up 35 percent on the same time a week earlier, he added, without giving the actual figure.

Almost 41 million people in Italy have so far been fully vaccinated, government data shows – close to 76 percent of the population over the age of 12.

But authorities remain concerned about the hold-outs ahead of the winter flu season, and this week extended the so-called “Green Pass” to all public and private workplaces.

Meanwhile, Italy reported 26 coronavirus-related deaths against 51 the day before, the health ministry said, while the daily tally of new infections fell to 3,838 from 4,578.

It was reportedly the biggest such get-together in the country since the start of the pandemic when large public gatherings were halted to stop the spread of the virus.

Social media showed images of vast crowds of beaming youngsters on the Complutense campus, drinking, dancing and hanging out with hardly a mask in sight.

Iran reopens museums in Tehran and other cities after a more than year-long closure because of Covid-19.

“Museums in Tehran and other large cities that are no longer red-coded, meaning the risk of contracting the virus was very high, reopened,” said Iran’s museums director Mohammad-Reza Kargar.

“Tourists and visitors are welcome to return while observing (sanitary) measures,” he added.

Tens of thousands of devotees packed the old palace courtyard in the heart of Nepal’s capital to celebrate the feast of Indra Jatra, marking the return of the festival season in the Himalayan nation after it was scaled down because of the pandemic.

The weeklong Indra Jatra precedes months of other festivals in the predominantly Hindu nation.

South Africa says it is “disappointed” that the country was still on Britain’s red list for travel restrictions.

“We firmly believe there is no reasonable basis for keeping South Africa on the red list and I am very disappointed,” Foreign Minister Naledi Pandor says.

“We have a smaller number of infections than the UK, similar variant dominating, advanced genomic surveillance, and transparency on science and policy.
So why this discrimination? @BorisJohnson,” virologist Tulio de Oliveria asked the UK prime minister on Twitter.

India reported 30,773 new coronavirus infections in the past 24 hours, the federal health ministry has said, taking its Covid-19 tally to 33.4 million cases.

Australia’s second-largest city will exit its coronavirus lockdown in late October if vaccine targets are met under an official roadmap released on Sunday.

About five million people in Melbourne have been under stay-at-home orders since August 5, the sixth lockdown they have endured so far during the Covid-19 pandemic.

Officials in Victoria state, which includes Melbourne, announced those orders would be lifted when 70 percent of over-16s are fully vaccinated. They projected that target would be reached around October 26.

“Lockdown will end. The (limited) reasons to leave your home and the curfew will no longer be in place,” Victoria premier Dan Andrews said, adding that a raft of restrictions would still be enforced.

Restaurants and pubs will be allowed to reopen but only with a maximum of 50 fully vaccinated people seated outdoors, while a ban on visitors to homes will remain in place.

But once the vaccination rate lifts to 80 percent – projected by roughly November 5 – fully vaccinated Melbourne residents will enjoy a greater range of freedoms, including no masks outdoors, up to 10 visitors to homes, and the option to work from offices.

Australia reports 1,607 cases as states learn to live with virus

Australia has reported 1,607 new coronavirus cases as states and territories gradually shift from trying to eliminate outbreaks to living with the virus.

Victoria, home to about a quarter of Australia’s 25 million people, recorded 507 cases as its premier said a weeks-long lockdown will end once 70 percent of those 16 and older are fully vaccinated, whether or not there are new cases.

Premier Daniel Andrews said the state might reach that vaccination threshold around October 26. About 43 percent Victorians have been fully vaccinated and just over 46 percent people nationwide.

“We will do so cautiously, but make no mistake, we are opening this place up. There is no alternative,” Andrews said. We “cannot perennially or permanently suppress this virus. Lockdowns have been about buying time to get to 70 percent and 80 percent vaccination.”

Many social distancing restrictions will remain and retail and hospitality venues will be limited, but people will be free to leave their house without a reason.

New Zealand has reported 24 new locally acquired coronavirus cases, up from 20 on Saturday, showing an upturn after several days of lower numbers, as the country’s largest city Auckland awaits to hear if its lockdown restrictions will ease.

All of the new cases have been reported in greater Auckland, a city of about 1.7 million people which has been in a full level 4 lockdown since mid-August.

The government of Prime Minister Jacinda Ardern is to announce on Monday whether the alert levels for Auckland and rest of the country will be changed.

Until the weekend, New Zealand was on a path to eliminate the latest outbreak, which began in mid-August and has infected 1,050 people with the highly transmissible Delta variant of the coronavirus.

“Delta’s tail is long and it is hard,” Ardern told a briefing on Sunday.

Director of Public Health Caroline McElnay said that health officials are “still cautiously optimistic” that the vast bulk of the latest outbreak was under control.

New Zealand had been largely virus-free for months until the latest outbreak. It has had just over 3,700 confirmed infections since the start of the pandemic and 27 deaths.

Australia’s most populous state, New South Wales, has reported 1,083 locally acquired Covid-19 infections and 13 more deaths in an outbreak of the highly transmissible Delta variant that began in mid-June.

There are 1,238 people admitted to hospital, with 234 in intensive care, 123 of whom require ventilation, the New South Wales health ministry said on Twitter.

There are now 5,262 active cases of the virus in Victoria, home to nearly 7 million people.

Mexico has reported 11,711 new confirmed cases of the virus and 765 deaths, bringing the total number of infections since the pandemic began to 3,564,694 and 271,303 fatalities, according to Health Ministry data.

The ministry has previously said the real coronavirus numbers are likely significantly higher.

SoFi Stadium fans must have vaccinations or negative tests

The Los Angeles County Department of Public Health has required fans attending Rams and Chargers games to show proof of vaccination or a negative test result within 72 hours.

The mandate takes effect beginning October 7 at all outdoor events with at least 10,000 attendees and impacts anyone age 12 or over. Children do not need to have been tested but must wear a mask. Adults also must wear masks.

Arizona has reported more than 100 daily virus deaths for the second time since February.

The 108 confirmed deaths and 2,742 new coronavirus cases were reported on Saturday. Hospitalisations dropped below 2,000 for the first time in nearly three weeks, with 1,981 patients occupying hospital beds on Friday.

US administers about 384.9M doses of vaccines – CDC

The United States has administered 384,911,290 doses of vaccines as of Saturday morning and distributed 466,569,635 doses, the US Centers for Disease Control and Prevention said.